What are we about?
CDA Amsterdam believes that city matters should first and foremost be handled by civil society, and not by individuals, government, or the (free) market. We believe in Amsterdam as a community of free citizens who take responsability for themselves, for each other and for their city as a collective home. For us, bonds between people make all the difference - by driving collaboration, commitment and shared efforts for the common good.

The Amsterdam city government (consisting of the city council and the municipal executive) should not limit, contain, or fully take over societal efforts but rather facilitate, enable and enhance them. The various branches should value the activities & contributions of people and organizations, actively listen to address societal concerns, provide a safe & clean living environment and hold people accountable for their actions. The city government should reduce the burden of bureaucracy, stop imposing unreasonable measures and cease to create situations in which unjust treatment can prevail.

What do we want for Amsterdam?
The city has failed to deliver in some of its most important and fundamental tasks: ensuring a safe and clean environment, and ensuring Amsterdam to remain a city where the middle classes can afford to live and the poor receive all the support they need. We need to tackle the housing crisis, crack down on crime, clean-up the city and improve our environment by becoming less dependent on fossil fuels.

We want to improve the overall political climate in the city. There is too much distrust, including dustrust of the government in its own citizens. We want to revitalize civil society: less technocratic, top-down, bureaucratic government, but greater accountability of our leaders and higher priority for the governments chief duties. We want the city council and municipal executive to work together to ensure that the citizens' priorities are addressed effectively. That said, we expect a pro-active attitude from you as ‘Amsterdammers’ as well: don’t wait for someone else to solve or address things - get started!

City government should be serving the needs of its citizens, and these citizens should feel both empowered and responsible for their actions.

Effectively what we want is a new ‘social contract’ in our beloved city, which is why we picked ‘A new social contract for Amsterdam’ as the name of our election program.

Are we Christian?
Some of us are, some of us are not. We believe people are free to chose what they believe in and how they want to organize their social structure. We value and welcome all backgrounds and faiths. As Christian Democrats, our political values have Christian-Judaic roots, and we aim to foster caring, connected and inclusive communities. For specifics on the history of our party we refer you to our national CDA website.

What specific things are we looking to accomplish in the next few years?
We have a ‘Verkiezingsprogramma 2022-2026’ (election program - link) which outlines in detail our vision for Amsterdam and a list of specific things we hope to achieve/fight for.

We have prioritized 3 themes:
1) Fostering a caring city
We want to foster communities in which people look after each other. Acts of kindness and small gestures can make all the difference. Too many children grow up in poverty in the city: our pledge is to reduce poverty and ensure that every child receives the best opportunities in life.

In order for that to work we also need to prioritize safety. More and more youths have taken to carrying knives and knife-crime has been on the rise. We need to end this cycle of violence and crack down on the drug-driven crime syndicates that use our beloved city to fight their battles and launder their money. We also need to improve our collective healthcare system. Too many homeless and mentally ill people room the streets.

2)  Housing in the city
We need more affordable housing in - and around - the city. Beyond simply building more apartments we want to ensure that families and those earning a moderate income will be in a position to continue to live here. In doing so we will look to neighboring towns as well. While creating new homes is a priority we will also seek to preserve our city’s historical architecture, ensure there are sufficient parks/outdoor spaces, and that the general environment supports the well-being of Amsterdammers.

3) Ensuring a clean city
Amsterdam is the most beautiful city in the country (then again, we may be biased!). But unfortunately there is often (too much) rubbish, trash and dirt on the streets. We believe the city government should do more to ensure timely cleaning and that businessescan do their bit to help. Examples of our proposed measures include promoting re-use/limiting household waste, working with private companies for trash collection at businesses, placing ‘smell sensors’ on garbage containers, organizing volunteer-driven neighborhood ‘cleaning days’, placing mobile cleaning teams in touristy areas, etc etc.

Erfpacht (land lease fees)
In terms of our priorities in specific domains the topic of ‘erfpacht’ (city government ground lease fees) is at the top of the list.

What is Erfpacht?
The system of government ground-lease in Amsterdam contributes significantly to the housing crisis. This must stop. The city government owns over 80 percent of the land. Everyone who owns property on it needs to pay ground lease fees. The amount is paid periodically (with adjustments for inflation) or is prepaid for limited time periods (up to 50 years, unless it is paid off through the new ‘perpetual ground lease’ arrangement, see below). Periodic amounts are completely re-calculated when the fixed time periods are up for renewal, and payments due are often suddenly significantly higher as a result. The system is not merely incredibly complicated but deeply unjust: it saddles home-owners with enormous extra housing costs. This also affects the prices of rentals.

In 2017 the city introduced a process through which those paying ground lease fees could move from periodically recalculated conditions to a new ‘perpetual ground lease’ arrangement called ‘eeuwigdurend erfpacht’. Unfortunately this move has led to even more confusion and, in our opinion, unequal treatment of citizens. An independently conducted study confirmed: the city ground lease structure does offer sufficient protection.

What do we want to do when it comes to the current Erfpacht system?
In short: we want to get rid of it, and people who paid upfront for the eeuwigdurend erfpacht should become land owners rather than perpetual lease owners. For those who missed the original (and presumed to be most favorable) deadline to request the switch to eeuwigdurend erfpacht of 7 January 2020 we also want a program that allows these early 2020 conditions to remain applicable up to the next sale of the property (if they are more favorable than conditions in place at the time of sale).

The above is only a sample of our proposed measures and if you want more on this topic please contact us at fractie@cda.amsterdam.

Other topics
If you would like more detail on a specific item of interest to you, such as traffic, education, energy, arts & culture, tourism, safety, etc (we have identified 10 (more detailed) domains in our election program), we recommend you either read through our election program with the help of a Dutch friend or neighbor (which will hopefully be a nice intercultural social activity as well!) or contact us at fractie@cda.amsterdam.

Who is on our ballot?
﻿We have 41 people on the ballot, so there are plenty of candidates to choose from! There is more information on each candidate elsewhere on the site (link - in Dutch), but we will highlight our number one (our ‘lijsttrekker’), Diederik Boomsma, below.

Who is our lijsttrekker?
Diederik has served on the city council as our local CDA party leader (‘fractievoorzitter’) since 2016. He’s been an engaged, active and passionate member of both the council itself and the various subject-focused committees. Most importantly, he has accomplished a lot over the years: just this past 4-year term a whopping 127 of his proposals were accepted/passed by the council, on a wide range of topics: from getting retired police-officers to re-enlist to improve the safety of our city, to improving our school-system; from better preserving the biodiversity of our built environment and green roofs, to saving a number of art-institutions that threatened to go under due to the Corona crisis. He has led the opposition in several fields, including the ground lease debate, and in protecting the city’s architectural heritage. His focus on just & equal treatment of all has been relentless, and he plans to continue driving our priorities in the next term.

Next to his city council role Diederik is pursuing a PhD at Leiden University. Prior to moving to Amsterdam in 2007 he worked in London and obtained a Bachelors degree in Environmental Science from Durham University and a Masters degree from UCL in Ecology and Nature Conservation. Last but not least he is fluent in several languages, including Spanish, and translated a book by the Spanish Philosopher José Ortega y Gasset in 2016. 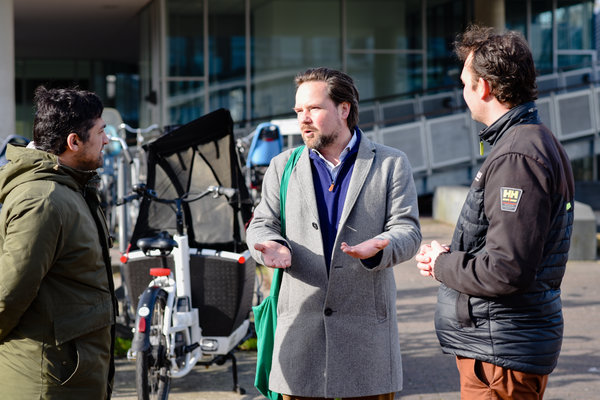