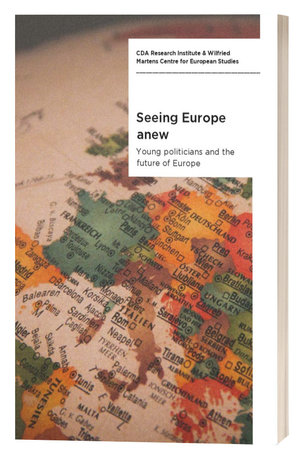 Seeing Europe anew. Young politicians and the future of Europe

The CDA Research Institute and the Wilfried Martens Centre for European Studies have produced a collection of interviews with young European politicians: Seeing Europe Anew. The interviewed politicians are members of parties affiliated with the EPP. In the interviews, the politicians reflect on the origins and future of Europe. In addition, they reflect on the role that Christian Democracy has played in history and can play in the future.

Anyone who looks at Europe will see that Europe is never complete. Previous generations have endowed Europe with a rich heritage of traditions, cultures, diversity, and pluralism. And because of the endless diversity that characterises Europe, the European project is always a work in progress. Ultimately, this means that it is essential to revisit Europe from time to time and to bring the European project to the forefront of debate. In short: to see Europe anew. For the politicians who are interviewed in this collection, the idea of Europe as a work in progress is an inspiring one. Europe is a possibility, an opportunity, a perspective.

Nine young politicians were interviewed for this booklet. Some of them are mainly active at national level, others at European level. Together they represent the breadth and diversity of Europe and the EPP. The book is neither a literal account nor a summary and digest of each individual interview, but rather a composition of content from these multinational and multicultural dialogues on themes relevant to European Christian Democrats and members of the EPP.

In the words of Esther de Lange, Member of European Parliament and Vice President of the European People's Party, in her concluding essay:
The answers here are as rich, diverse and at times as surprising as these young politicians are. They come from literally everywhere in Europe and are the sound of inspirations and traditions that are as widespread as they are rich. The answers from Finland are as fascinating as the ones from Portugal, and those of the Croatian and the Romanian are as idiosyncratic as those of the Frenchman or Dutchman. In all their pluralism, the reflections and thoughts of the young Christian Democrats and centre-right politicians here are as coherent in many aspects as they are grounded in recognisable experiences and values.

The book is an initiative of Yohannes Wiebes, Felix van Litsenburg and Diederick van Wijk, members of the Europe Network of the Dutch Christian Democratic Appeal. It is a joint project of the Scientific Institute for the CDA and the Wilfried Martens Centre for European Studies. The editors of the book are the Dutch historian P.G. Kroeger and André Poortman, staff member of the Scientific Institute for the CDA.

The book can be viewed online via the websites of both institutes and can be ordered via wi@cda.nl.